You are to read Founding Brothers by Joseph Ellis. 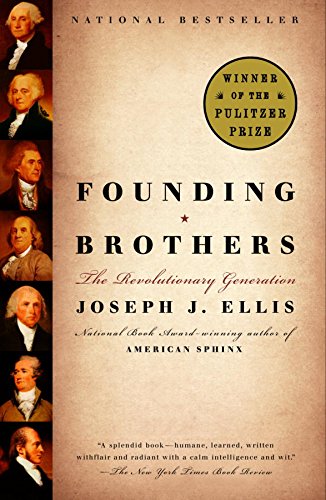 This book is found in the NYPL system in their catalog as well as on Amazon and other online
retailers. As you are reading, answer the following questions. Answers should be typed and will
be collected on the first full day of class.

1. It is important to read the Preface or Introduction in any book, and in this case, Ellis makes some great points about early U.S. History, which help give clarity to the rest of the book. What is so phenomenal about the American Revolution and the subsequent founding of the United States?  What are the criticisms of the Constitutional Convention, and how do they stem from  the American Revolution?

2. The long standing feud and subsequent duel between Alexander Hamilton and Aaron Burr may be the most famous fight between individuals in United States history.  Why was the country so interested in these two men?  What were the causes and effects of the “Interview at Weehawken”?  Not just immediate, but long term.

3. Madison, Hamilton, and Jefferson met not just for dinner, but to iron out some major issues plaguing the new nation.  What were the issues, and what compromises were reached?  What impediments were there for each issue?  If all of the leaders were working to make this experiment in democracy a viable one, what accounts for their different opinions and priorities?

4. The issue of slavery did not just divide the country in 1861, but had been a contentious problem since the founding of the U.S.  After fighting for freedom and liberty, why did the Founding Brothers allow slavery to have Constitutional protections?  Why would it have been very difficult to abolish slavery in 1790? Why do you think this chapter is entitled “The Silence”?  Give specific examples.

5. Joseph Ellis and I both believe that George Washington was an incredible man, of “rock star” proportions during his lifetime.  What were some of Washington’s accomplishments?  Even as the only president to be unanimously elected by the Electoral College, Washington faced criticism and backlash during his presidency.  What were the criticisms, and who were his main critics (individual and groups)?  How did Washington address them in his Farewell Address?

6. Who became an “incongruous pair”, both during the Revolution and again after?  How had they worked together?  How and why did they come to oppose each other? What role did political parties play? Give specific examples ranging from 1793- 1812.  How and why do they re-establish their relationship?  Their letters provide great insight into their political differences- using slavery as the issue, explain their different beliefs and styles.  What legacy has each left for the U.S. government today?  When did they die, and why is that still considered significant today?

Part 2:
You must print out the APUSH Agreement, and you and your parent or guardian
must read it and sign it. This is due to me on the first day of class.